The life-saving benefits of kangaroo care 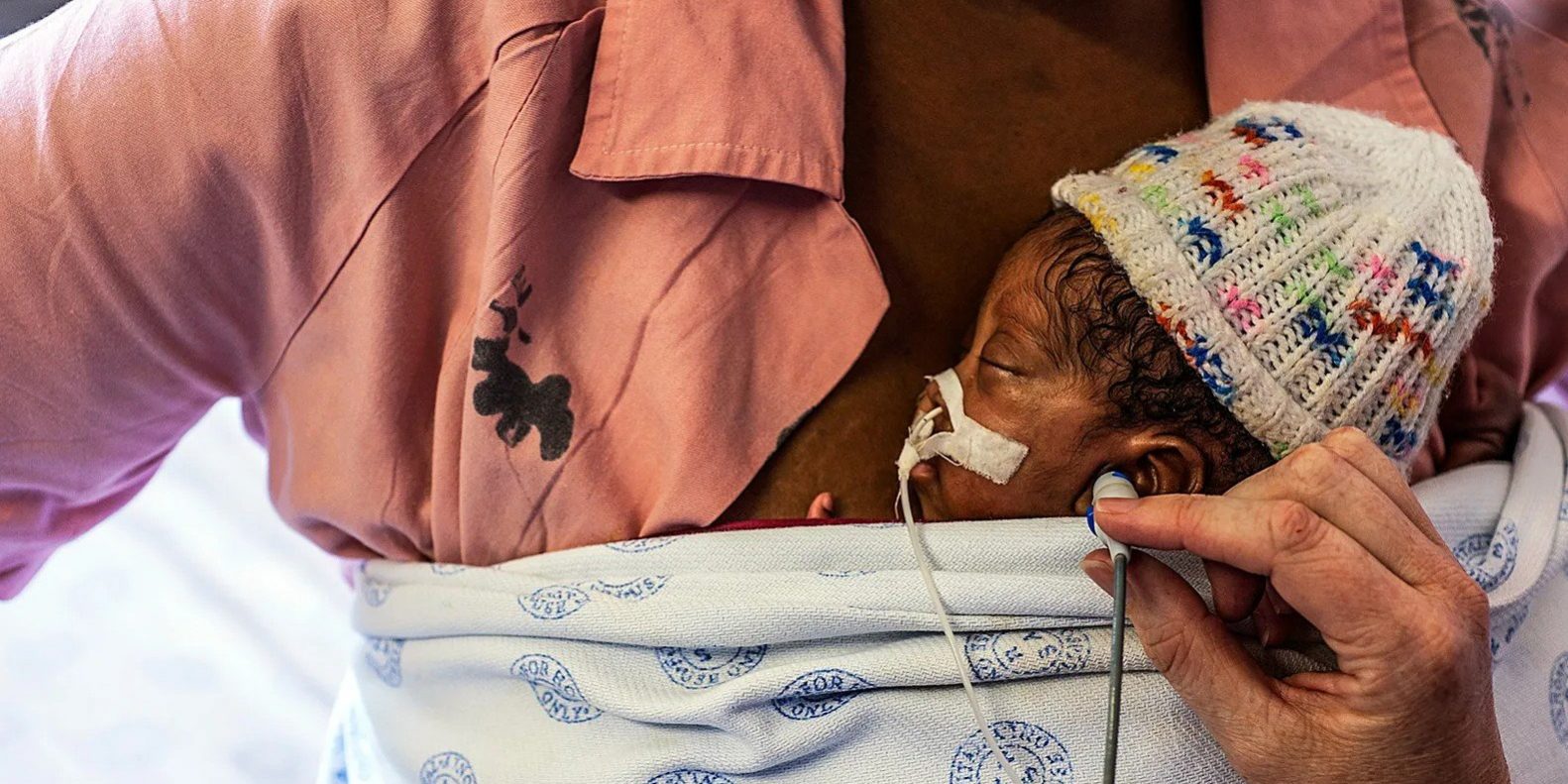 A method of caring for premature newborns by swaddling them against their mother’s skin is reducing pressure on incubators, but has also been found to bring other benefits too.

Ojoma Ekhomun knew the birth of her first child was going to be difficult – just as she went for her six-month check-up and scan, Nigeria went into lockdown. What she did not expect at that appointment in March, was to find herself back at the hospital less than a month later going into labour just 31 weeks into her pregnancy.

Her tiny, premature son weighed just 1lb 8oz (700g) when he was delivered through caesarean section. He was underdeveloped and his low weight made him extremely vulnerable. According to doctors, the baby boy – named Akahomhen – was the smallest child to have been cared for at the Amuwo Odofin Maternal and Child Centre in Lagos, where he was transferred immediately after being born.

In the days that followed, Akahomhen’s weight dropped to 1lb 5oz (600g) and his doctors were concerned. Around 205 babies die in Nigeria every day as a result of being born premature – accounting for 31% of all neonatal deaths in the country.

Despite being Africa’s biggest economy, poor investment in health infrastructure, coupled with limited access to maternity services in some areas, means that neonatal mortality in the country is among the highest in the world. Rural areas in particular have high rates of maternal and newborn deaths.

Fortunately for Ekhomun’s son, the Amuwo Odofin Maternal and Child Centre is one of the more modern facilities in the country. Doctors were able to put her son into an incubator – often in short supply in Nigeria – and slowly his weight began to rise. But just as he reached 2lbs 3oz (1kg) – still a critically low weight for a newborn – they took him out.

Instead, the doctors bundled him against his mother’s chest, their naked skin pressed against each other. Ekhomun carried him like this everywhere she went over the following weeks, unwrapping him only to breast feed and to sleep.

Slowly her son began gaining weight, putting on around 1oz (30g) a day until he weighed 3lbs 15oz (1.8kg) at 60 days old. Initially he had to be fed through a syringe, but gradually he began to breastfeed. Over the following months, Ekhomun continued to carry her son swaddled next to her skin as he grew into a healthy, bouncing baby.

“He is very safe there,” says the 26-year-old mother. “I enjoy the heat between the baby and myself.”

This simple, but remarkably effective approach – known as “kangaroo care” due to the way the baby is carried on the mother’s front – is regarded as one of the best alternatives to incubators when caring for premature and low-weight babies.

“We have about 19 randomised trials from all over the world that show a reduction in deaths,” says Joy Lawn, a professor of maternal, reproductive and child health at the London School of Hygiene and Tropical Medicine in the UK. “Most of those trials have focused on babies who are already less sick. They are still preterm but they are not very ill.”

Lawn has spent over a decade researching the benefits of kangaroo care, particularly in Africa. Her research suggests kangaroo care can provide a lifeline to premature babies in rural and hard-to-reach communities where access to incubators is limited.

But she believes the approach is vastly under-used and could also be of benefit in more developed countries to ease pressure on overstretched neonatal intensive care units.