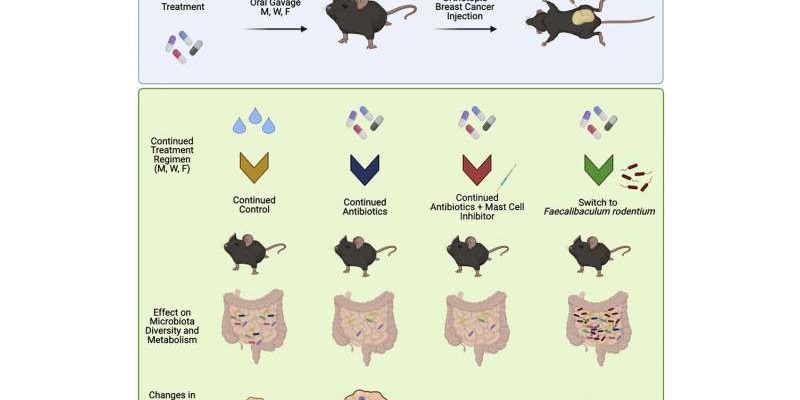 Leading scientists have identified a possible link between antibiotic use and the speed of breast cancer growth in mice, and identified a type of immune cell that could be targeted to reverse it.

In a new study funded by Breast Cancer Now, researchers from UEA and the Quadram Institute found that treating mice with broad-spectrum antibiotics increased the rate at which breast cancer tumors grew in them.

They also observed an increase in the size of secondary tumors that grew in other organs when the cancer spread.

Led by Dr. Stephen Robinson, Group Leader at the Quadram Institute and Research Leader at UEA, the team used a cocktail of five antibiotics, and broad-spectrum antibiotic cefalexin on its own, to investigate how disrupting a healthy balance of bacteria in the gut affected breast cancer growth in mice.

The researchers discovered that the use of antibiotics led to the loss of a beneficial bacterial species, which in turn sped up tumor growth.

Through further investigation, the team also found that a type of immune cell, known as mast cells, were found in larger numbers in breast cancer tumors in mice treated with antibiotics. Blocking the function of these cells also reversed the effect of antibiotics and reduced the aggressive growth of the tumors.

It is hoped that these results could lead to a refinement of antibiotic use in people affected by breast cancer, and the development of new ways to counteract the negative effects that certain antibiotics could have on breast cancer.

This is important as while chemotherapy is a cornerstone of breast cancer treatment it reduces the number of white blood cells in the blood, making people more susceptible to infection. Antibiotics are therefore often prescribed to breast cancer patients to control any infections that arise during chemotherapy treatment.

Dr. Stephen Robinson, Group Leader at the Quadram Institute and Research Leader at UEA’s School of Biological Sciences, said: “With the rise in bacteria resistance to antibiotics we have known for many years that we need to be very careful about clinical antibiotic use.